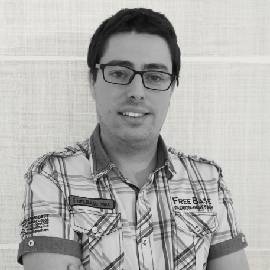 Julio is a recognized expert in many areas of Cybersecurity. Thanks to his training and capacity, he has participated and led projects with great success, some of them internationally.

His career at APEIROO began in 2015 as a developer of ICT applications, specifically he was in charge of the development team of Ufreedoms (www.ufreedoms.co). Three years of hard work that concluded with the launch of the only 100% anonymous instant messaging platform in the world, secure and independent from large corporations or governments. Any messages either on the terminal or on the servers are safely deleted every hour, removing any metadata that might leave a trace.

He was an important part of some other key projects for APEIROO such as IRONCLAD, IRONPEOPLE or SNUPPER, technology that obtained a Patent (P201631455) and which allows the detection of electronic devices in a given perimeter.

From 2018 he has been working as CTO, participating in the development of the company’s strategy and being part in international projects in Netherland, Germany, Mexico, China …

He attended courses on wireless environments and Advanced Radio Hacking such as the one given by the Rooted CON, Association in Madrid in 2018. At the programming level he is an expert in Python, BashScript, Javascript (Client and Server), PHP.